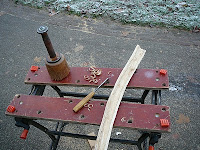 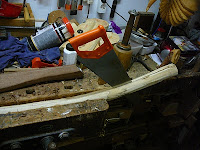 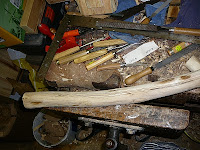 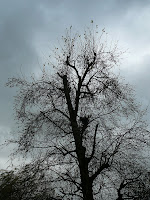 Het was even stil. 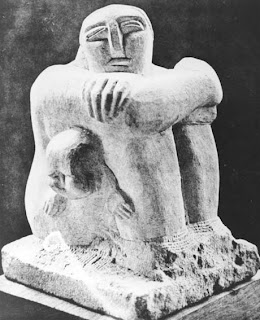 
Another coalminer's son. A different one.
Compare his treatment of life and procreation to Lawrence's.
Lawrence has the drift towards death. Moore shows real vitality.
Apollinic on the surface, there are much darker sides to his work than most people will realize.

Gassed in World War I
Worked as a bayonet fighting instructor
The horror of the trenches
The London Blitz Shelters
The child wish - (and loss of hope?)


I came to realize this on reading Sir Herbert Read's book (in German, incidentally):
D.H. Lawrence grew up in exactly the same environment [as Moore] and has described it for all time in books like The White Peacock and Sons and Lovers and some of his essays [...] Moore was never to experience the resentment and humiliation that Lawrence felt. Lawrence projects an unhappy family life into his environment; his surroundings are ugly because his life is ugly.

Eliot on Lawrence - best criticism ever

This might be the model of the West African Statuette in Women in Love, by D.H. Lawrence

From Chapter VI. Creme de Menthe
Gerald looked round the room. It was an ordinary London sitting-room in a flat, evidently taken furnished, rather common and ugly. But there were several negro statues, wood-carvings from West Africa, strange and disturbing, the carved negroes looked almost like the foetus of a human being. One was a woman sitting naked in a strange posture, and looking tortured, her abdomen stuck out. The young Russian explained that she was sitting in child-birth, clutching the ends of the band that hung from her neck, one in each hand, so that she could bear down, and help labour. The strange, transfixed, rudimentary face of the woman again reminded Gerald of a foetus, it was also rather wonderful, conveying the suggestion of the extreme of physical sensation, beyond the limits of mental consciousness.

`Aren't they rather obscene?' he asked, disapproving.

`I don't know,' murmured the other rapidly. `I have never defined the obscene. I think they are very good.'

Birkin suddenly appeared in the doorway, in white pyjamas and wet hair, and a towel over his arm. He was aloof and white, and somehow evanescent.

`There's the bath-room now, if you want it,' he said generally, and was going away again, when Gerald called:

`What?' The single white figure appeared again, a presence in the room.

`What do you think of that figure there? I want to know,' Gerald asked.

Birkin, white and strangely ghostly, went over to the carved figure of the negro woman in labour. Her nude, protuberant body crouched in a strange, clutching posture, her hands gripping the ends of the band, above her breast.

They all drew near to look. Gerald looked at the group of men, the Russian golden and like a water-plant, Halliday tall and heavily, brokenly beautiful, Birkin very white and indefinite, not to be assigned, as he looked closely at the carven woman. Strangely elated, Gerald also lifted his eyes to the face of the wooden figure. And his heart contracted.

He saw vividly with his spirit the grey, forward-stretching face of the negro woman, African and tense, abstracted in utter physical stress. It was a terrible face, void, peaked, abstracted almost into meaninglessness by the weight of sensation beneath. He saw the Pussum in it. As in a dream, he knew her.

`Why is it art?' Gerald asked, shocked, resentful.

`It conveys a complete truth,' said Birkin. `It contains the whole truth of that state, whatever you feel about it.'

`But you can't call it high art,' said Gerald.

`High! There are centuries and hundreds of centuries of development in a straight line, behind that carving; it is an awful pitch of culture, of a definite sort.'

`What culture?' Gerald asked, in opposition. He hated the sheer African thing. From Chapter XXIX. Continental
He paused a moment, then rose, and went out of the room. He returned almost immediately with a little roll of paper, which he handed to her. She unrolled it. It was a photogravure reproduction of a statuette, signed F. Loerke.
Posted by gafpa at 12:43 No comments: