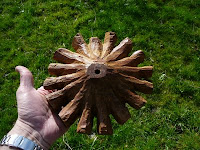 The weather was much better today

Today I went to see the Noah's Ark replica in Drachten 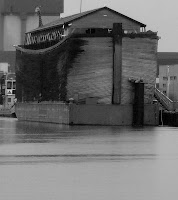 The rain was pouring - as if the flooding was about to begin - but not really favourable for telephoto pictures. 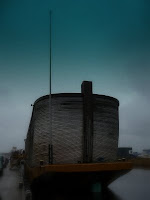 It is really a pity that this model is not really operational , like the Batavia for instance.
It reminded me of mythbusters, but then this whole project was set up to bust darwinism and to prove that Genesis is not a myth.

Two years ago I read Frank Westerman's Ararat - an account of his pilgrimage to Mt. Ararat and at the same time an exploration of his lost faith, the clash between religion and science and a quest for The Ark Itself.

I too am fascinated by the metaphysical character of the Ark and the flood.
But here was no room for any myth. And so I could not help wondering where Noah had kept the termites...
Or how eight people could ever dispose of that much manure, on a daily basis.

And then there was that lady, who agreed with me that the giraffe was at least twice the normal size. Were giraffes bigger in those days, she wondered.

The Armenian student and his family, proud of his - their Mount Ararat, where satelites had spotted the remains of the Ark.

Me - connecting everything with anything - supposing myself to be the only atheist present, ever sceptical.

www.gafpa.nl
Posted by gafpa at 16:16 No comments:

http://www.kunstzinnig.nl/details.asp?type=Kunstenaars&ID=3289
Posted by gafpa at 14:51 No comments: 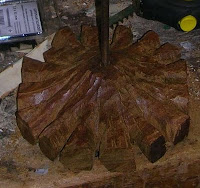 I am still struggling with the piece of tropical hardwood that is going to be the stand. It is really hard to handle and difficult to carve. Its grain is interlocked and splinters feel really poisonous.

I want it to be like a tree trunk and I want it at the same time to be like the nave of a wheel - with broken off spokes.
The idea came to me on seeing a picture of the driving wheels from GWR King Edward II at Didcot.

www.gafpa.nl
Posted by gafpa at 21:22 No comments: 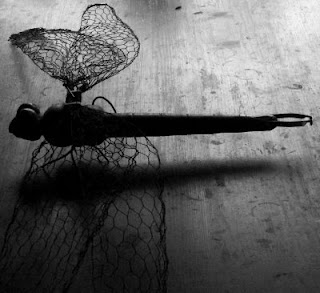 www.gafpa.nl
Posted by gafpa at 21:52 No comments: 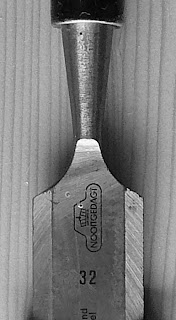 This photo fragment could be the model for a bust.

www.gafpa.nl
Posted by gafpa at 21:08 No comments: 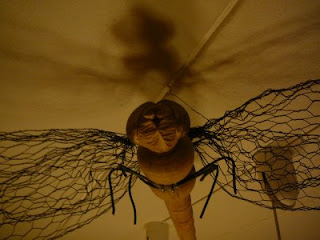 Meganeura - the giant dragonfly. Started in 1999 - willow, turned on a lathe, carved head. Wings from chickenwire. Never really completed and therefore without legs and cervi. It did need some reconditioning and so I added at last those legs from old metal wire. The cervi have been added as well.

www.gafpa.nl
Posted by gafpa at 21:59 No comments:

With horns from cuckoo-clock weights.
Work has started on what is to be a treetrunk-like stand

www.gafpa.nl
Posted by gafpa at 01:49 No comments: 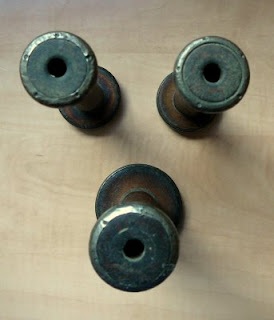 www.gafpa.nl
Posted by gafpa at 19:58 No comments: 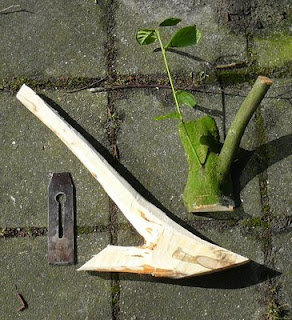 Adze in the making. Sawn from a freshly-cut laurel branch. Blade from a rather ancient Nooitgedagt plane iron.
[To be continued]