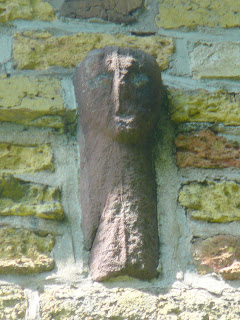 A grotesque in the rear wall of St Lawrence Church[Laurentiustsjerke/Laurentiuskerk] in the village of Kimswert
This might be a devil - in Frisian: Hantsje Pik [John Pitch].

George and the Dragon 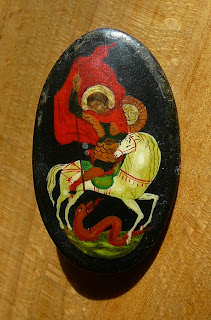 Чудо Георгия о змие
The miracle of George and the dragon

I visited Leningrad in March 1990, and it was a revelation. It was a bit of a shock however, to notice that everything centered around obtaining hard currency. Quite a different story from what we had learnt in school about communism. This was the USSR undergoing Perestroika.

Anyway, I bought this lacquer brooch from a street vendor for  very little money, 5 or 10 guilders or deutschmarks, I don't even remember.
We also went tot the Russian Museum, where I learnt about the Novgorod school of icon painting, with its characteristic use of red and green - more or less as used on my icon brooch.

Later I came to meet Sister Florentia in the City of Groningen. She was a nun, a retired teacher and had taken up icon painting as a hobby. She told that for her, icon painting had become a way of living a contemplating life. Contemplation was essential for appreciating icons, she said (or words to that matter). When I told her that I was a non-believer she remarked that, nevertheless, there was something very special about this icon and me: this was a token of this unique experience of making such a special trip to an exotic place (that's what it was in those days).
Such true words, such a wise woman.

And now for something completely different:


A drunk man knocks on the door of an inn known as St. George and the Dragon. The landlady answers. "Is George in?" asks the man.


In the early eighties, my neighbour John Nolan from Wigan(Lancs) used to tell this joke.