Inspiration while at work 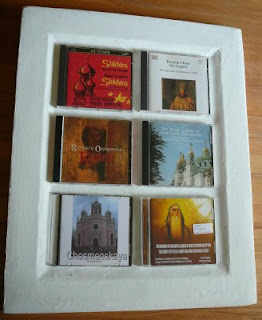 I do not need to hold a brush to be at work.


I am hooked on Russian icons and I am an atheist. The two do go together. While I do respect religions and people's religious feelings, mine is the observer's view.
I think dendrochronologic dating, dna research and a scientific approach might bust quite a myth or two, without diminishing the interest or fascination of the subject. 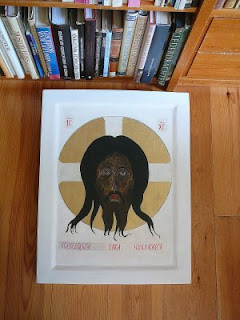 Made the background whiter today, but older paint layers are still visible - like a palimpsest. Lettering on an old sheet, to find out the right position. Did some work on the halo as well... Don't know if I should add lines to the cross' arms (see below). 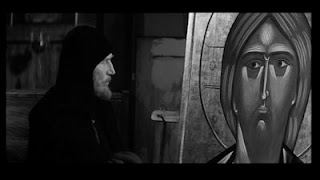 www.gafpa.nl
Posted by gafpa at 14:47 No comments:

Meanwhile, I started decyphering the callicraphy on the Nerukotvornyi Icon and I got as far as
UBRO[S]' G[OSPO]D[INA] B[O]GA
SP[A]SA NASHEGO I[E?]SA KH[RISTU]SYA
which would mean something like
Image/icon of Jesus Christ, Our Lord God the Saviour
But I am not an expert in Church Slavonic, so I would welcome any comments.

www.gafpa.nl
Posted by gafpa at 11:44 No comments:

Fringes of the tallit (prayer shawl). 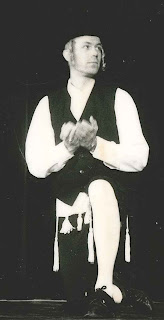 Or are they peyos

www.gafpa.nl
Posted by gafpa at 21:41 No comments: 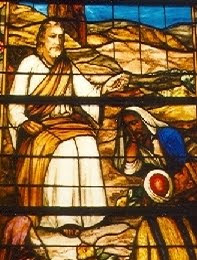 They were playing Cinderella Rockefella in the department store, so I must have been about eight. My parents were probably buying a lamp or an electric hand mixer on the same floor. I was bored and I turned over the record sleeves. Matthäus Passion it read - but that was all foreign language to me. It was the painting that horrified me.

I still don't know what upset me more. The orange, poisonous colour of the blood, or the thorns all over the body, or the crossbeam bent under the weight of the dead body. He was dead, I could tell by the halfopen mouth. Was this really the same as the friendly young man in white, with his neat orange sash [orange it was, not red, on the stained glass window in our Lutheran church]? I could not believe it. And yet I felt it must be so. But he looked squalid and I sort of felt guilty noticing it. One could not tell where the thorns ended and the hair began. But long hair was squalid in those days anyway, at least when worn by men. 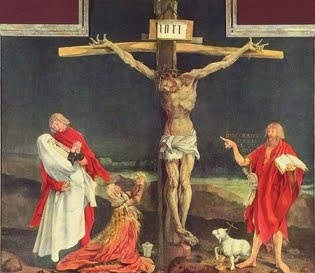 One or two years before that, a slightly older boy living nearby, had told that God was Jesus' father. That did not really upset me. Jesus was the name of that baby which had something to do with Christmas Trees. Then another boy started discussing the death on the cross. And I imagined a little baby bundle tied to the midst of a cross. It was a concrete cross, the first boy said. And I imagined the washing line pole that my father got over his shin - he nearly fainted and my mother was almost in tears. Then they were talking about nails 'crossed' through the hands and I imagined a quincunx-like pattern. We were protestants and our part of the country was protestant. Crucifixes were a rarity.

My parents sent me to Sunday school, where I could ask all the questions that I wanted to ask. And the first visit was a hit. Jephta's daughter, but I did not fully understand why she was burned at the stake. Anyway I made a drawing of it.
We had to draw the pictures ourselves, we were not shown any.
Later, around Easter, I made a pencil drawing of the cross [cast in one piece, still concrete?] men holding Jesus, a hammer and a box of nails.

A children's anthology, published by the Dutch Labour Press, proved rather informative, with a crucifixion story after a combined version of the four gospels. And then there were Catholic families, with crucifixes in their living rooms. Since it was a strictly observed custom in the Netherlands to have all curtains opened [for honest people have nothing to hide], I could easily peep into some houses while on my way to school, to satisfy my curiosity.

What did Jesus look like?
I asked my mother how they knew.
She said that the artists had seen it with their inner eyes.
So.

In 2012 I  went to see the Issenheim Altar in Colmar, France.
It was so huge and overwhelming. 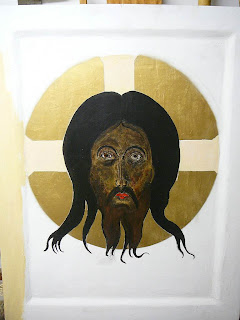 Still, more than I had ever expected, in just three evenings.
[And I started on a second panel in the meantime]

www.gafpa.nl
Posted by gafpa at 22:17 No comments: