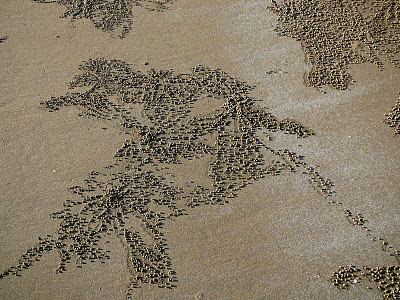 Just a beachwalk and a random pattern. It looked like a Tolkien map of the Shire, and it looked like Aboriginal art. This moment has already become a slice of dreamtime to me.

When I was a student and we read Caedmon's Hymn and Beowulf I got fascinated by the cosmic notions of the Anglo Saxons and the world picture of the Dark Ages
Se Middangeard - under heofones hrof.
The middle of the earth is where you are. At the crossing of the cardinal directions. It is you, under the roof of heaven.

Maps have fascinated me ever since I was a child and became aware of travelling distances.
In Pushkin's words (Boris Godunov):
Excellent, my son! As if you were looking from the skies, you may thus oversee the entire realm. Its borders, rivers and towns.
Kak khorosho, moy syn! Kak s oblakov yedinym vzorom ti mozhesh' obozret' vsyo tsarstvo: granicy, reki, grady.
In my own language, Frisian:
Dit is it wurk jong! As wie it fanút e himel wei, sa kinsto yn ien eachopslach it hele ryk oersjen: grinzen, djippen, stêden.
[Boris Godûnov]
This is perhaps why I climbed the roof of the gym and sports hall next to my grandmothers house in Harns(Harlingen), at age eleven or twelve. Just to look at things from above, and to see the sea.
This past is present 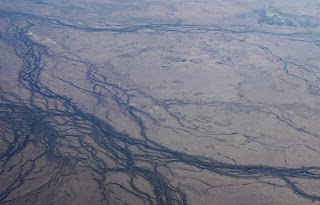 A slice of Dreamtime

Time present and time past Are both perhaps present in time future, And time future contained in time past. If all time is eternally present All time is unredeemable. What might have been is an abstraction Remaining a perpetual possibility Only in a world of speculation. What might have been and what has been Point to one end, which is always present. Footfalls echo in the memory Down the passage which we did not take Towards the door we never opened Into the rose-garden. My words echo Thus, in your mind. But to what purpose Disturbing the dust on a bowl of rose-leaves I do not know.